When I was a boy, I used to head out into the woods behind my house with a friend and collect a bunch of plants, mushrooms, and rocks—called them “ingredients.” Then we’d pretend to cook, mix, and eat this stuff to survive out in the woods before we retired into the house when it got too dark. Had we known as kids that you could actually eat a lot of the stuff we were collecting, our mothers probably would’ve freaked out. While I don’t suggest letting your kids go wild eating what they find in the yard, it might be a fun idea to show them how to live off the land a little, and you’ll definitely want to know your options if you ever find yourself stranded in the wilderness. So without further ado, here are seven things in your backwoods you didn’t know you could eat:

This first one was a definite favorite of mine because they were so weird—not a flower, but something strange growing from a stem that at least looked a little like food. It’s no surprise why some people call this thing “corn dog grass.” I know it by cattail, but still, others call it punk or a bulrush. Almost every part of this plant is edible. The plant’s rhizomes, the structure from where the roots shoot off, can be boiled or eaten raw. The stem is best toward the bottom where the plant starts taking on a white tint. You can even boil the leaves. As for that corn dog, I’m not kidding when I tell you it does in fact taste a little like corn. They’re tall plants so if you’re looking for them, you can’t miss them.
Bonus Note: Survival for people with special diets can be tough, but a fun fact about Cattail flower is although many people think of it like normal flour, it is actually a gluten-free option not just for survival but for everyday cooking.

Also known as “hen of the woods,” maitake mushrooms grow at the bottom of trees—oak trees in particular. The Japanese adore this mushroom and use it in many of their dishes. That’s partly because of its fabled medicinal properties, but barring any legendary powers, it’s one of your better options when you find yourself foraging to survive. Maitake mushrooms have been shown to lower blood sugar, and they’re packed with healthy antioxidants. If you find yourself lost in the Northern United States, be on the lookout for colonies of maitake to sustain yourself until you make it back to civilization. 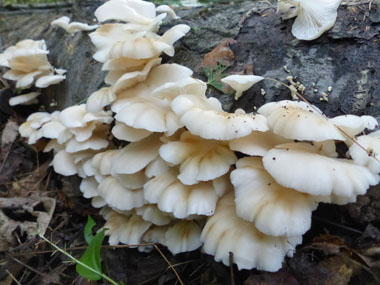 Another more commonly eaten mushroom is found growing on old tree trunks and feeding off the decaying wood: the oyster mushroom. Surprisingly, it’s one of the only known carnivorous mushrooms, occasionally eating nematodes. Still, don’t let that stop you from trying this one out. It smells similar to anise or licorice, but when picked young, its taste is rather mild. Try not to eat older oyster mushrooms, though, as they start to taste worse as they age. Also, you’ll want to wash these with some water to make sure you remove any insects hiding in the ridges of the cap, and don’t eat the stems; they’re usually too tough and glossed with wood residue.

Grassy fields and clearings almost always have dandelions growing in them. And although you may hate them for ruining your lawn, these things are jam-packed with nutrients: calcium, iron, magnesium, potassium, Vitamin C, Vitamin A. You can eat every single part of this plant. They taste sort of like arugula, and they’re great in a salad. If you’re more concerned with surviving out in the hills though, look for that distinctive yellow or white to keep yourself satiated. As for my friend and I, we used to think these things were an essential ingredient because that color must’ve indicated some kind of healing. I guess we weren’t too far off considering their nutrition value.

Another common plant found wherever there’s grass: clovers are an essential survival food. They’re high in protein and pretty tasty when boiled. They’re tough to digest when eaten raw, but you can remedy this by juicing them. You can also eat clover flower heads or their seed pods, but make sure to either dry them out completely or eat them when extremely fresh. Don’t pick them and let them ferment before eating them, as they can make you dangerously sick.

Yes, you can eat these things. There are too many here to picture, but ants, beetles, grubs, and grasshoppers are ones that I have stomached before and I can tell you it will be a survival situation before I do it again. Most people would take up bug-eating as a last resort, but they’re surprisingly healthy little creatures. To survive in the wilderness, you’ll need a diet high in fat content, and luckily these guys are entirely fat. And it goes without saying, but they’re everywhere. They’re really the best fail-safe for when you’re lost or stranded in the woods. You can catch them by setting up a fire or similar light source. That said, you’ll want to discard any of its hard sections, its legs, and its wings before eating. 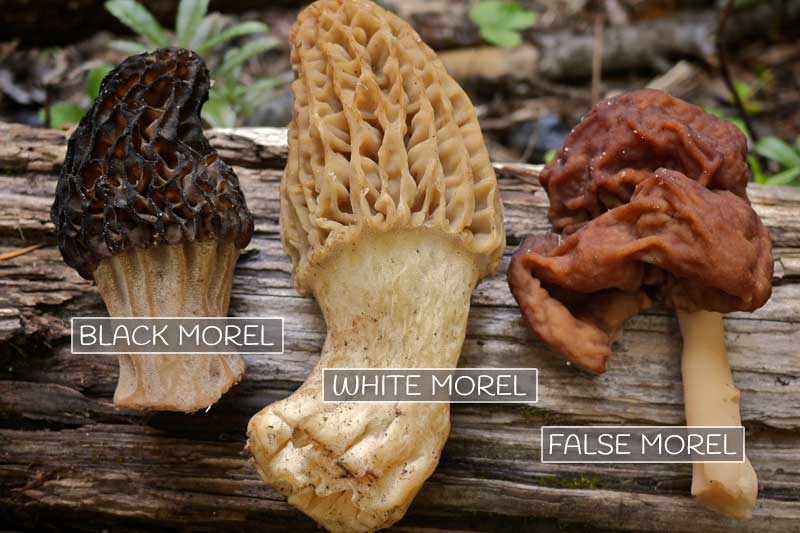 As of the writing of this, they are going for $70-100/lb in the grocery store by me! Now a pound of these would be too many for about anyone. I could not find any on my property but in doing my research I pick up about $10 worth and fried them up over high heat in my cast-iron skillet. They were They have a hearty, smoky flavor. If you get a chance to try one, you won’t be disappointed, and they’ll be quite the saving grace if you stumble across one in a survival situation after having eaten nothing but the other foods on this list.
IMPORTANT FACT: There are some seriously poisonous fungi masquerading as morels. These false morels look similar, but they’re distinct enough to tell them apart in two ways:

So there you have it! Now get out there and enjoy